Berlin – When The Wall Comes Down And 2 Cities Become 1. 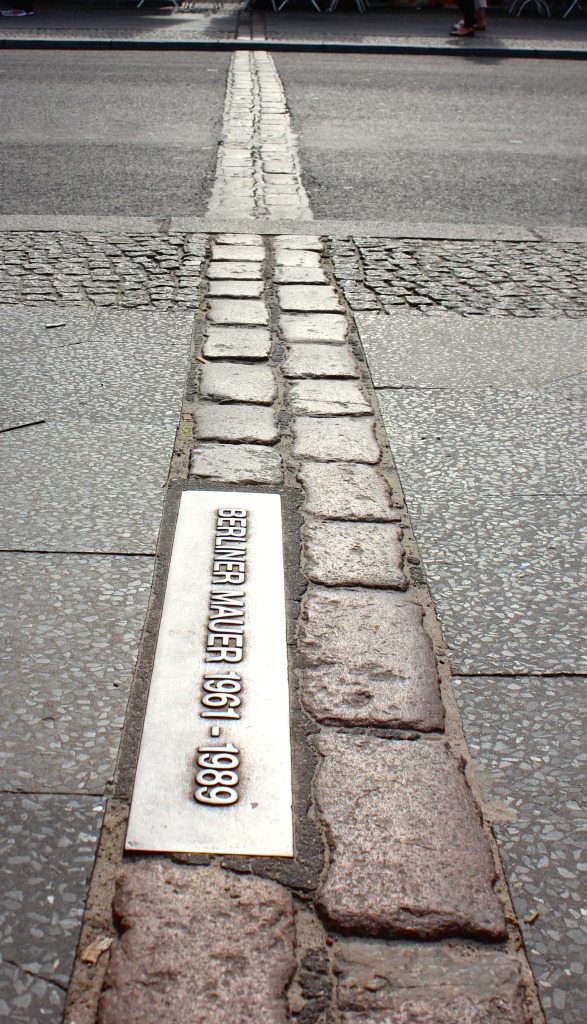 We traveled from Hannover, Germany to Berlin on the train, which was only 2 hours. It wasn’t nearly as busy as our  last train ride, and we were lucky to get some seats together, we didn’t book any reservations on this train. We did buy our tickets the day of travel, and they were a bit pricy, but we quickly understood why the tickets were so expensive. The final FIFA World Cup championship was that night, and we were heading for the capital of Germany. The ultiment game!! Germany vs. Brazil with a game time start of 10:00 pm. The city was buzing with tourists, and the locals traveling to the city to celebrate the big game.

Berlin was a very big city and in our opinion one the most amazing one we did see. We greatly enjoyed the amount of history this city has, and the stories that go with it. We walked around the city with the Hop On Hop Off map (in German, grab the english one) of the must sees, just to help us cover some ground in the large city.

The top must see for us while in Berlin is the “The Wall”, Brandeburger Gate, Hitler’s Bunker, and the Holocaust Memorial. While walking around from one location to another, you found many more points of interest. Our hotel was located a fair distance from the area of interest, but we did have the luxury of walking thourgh the huge park/garden in the middle of the city every day. 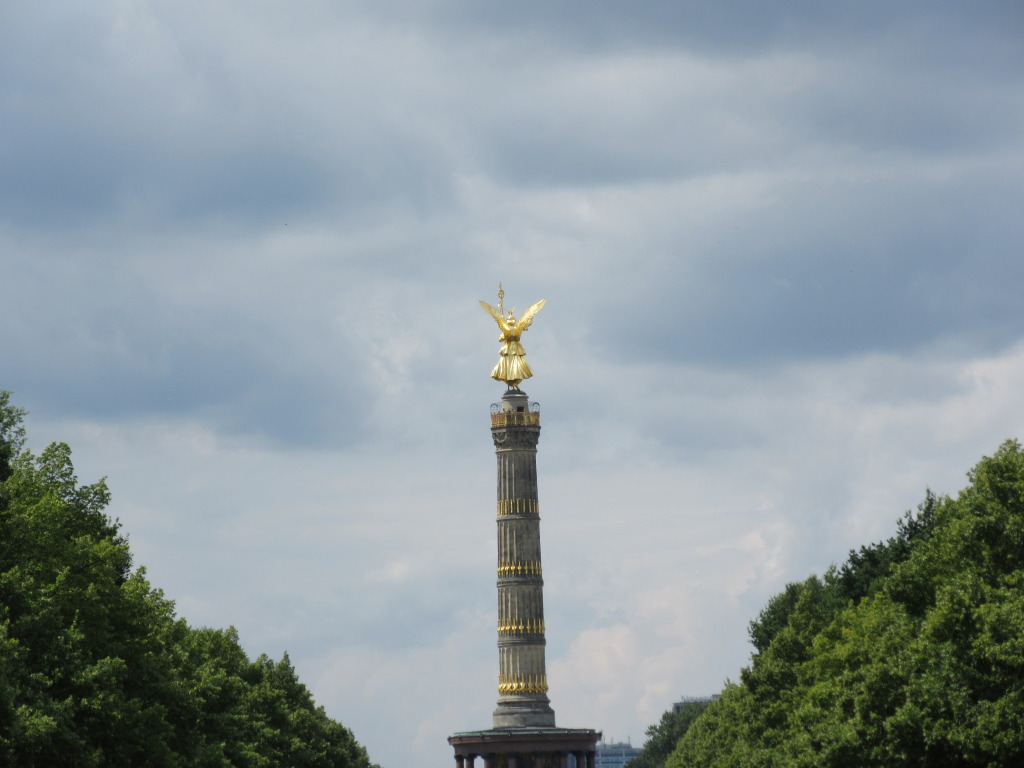 First thing we found once we got off the train station and headed towards the city was the Reichstagsgebäude or Parliament Building. They do offer a tour of the inside, and to the top of the dome which offers one view point of the city. The line up was killer as it was super tourist season, and we didn’t have an abundance of time to explore the tops of all the buildings in Berlin (although that’s Mel’s favourite).

Just a few blocks away we found the Brandenburger Gate, and what a sight to see indeed. We did walk around to find out where everything else is located, followed by the long 45 minute walk towards our hotel. It was located down the “Fan Mile”, and around The Victory Column, and then still a bit to go! It was accessible by train, but we chose to walk it every day, We had a beautiful park to walk through every day, and took that opportunity.

Berlin has a lot to do and see, we visited for 4 days and visited as much as possible, this is what we did while here:
– Berlin Wall (of course)
– Berlin Wall Memorial
– Checkpoint Charlie
– The Berlin Victory Column/Siegessäle
– Brandenburger Gate
– Reichstag / Parlament
– Holocaust Memorial
– Hitler’s Bunker
– FIFA World Cup on the Fan Mile
– Gendarmenmarkt
– Searched for Penny Collector Machines
Check out more Things To Do In Berlin, Germany 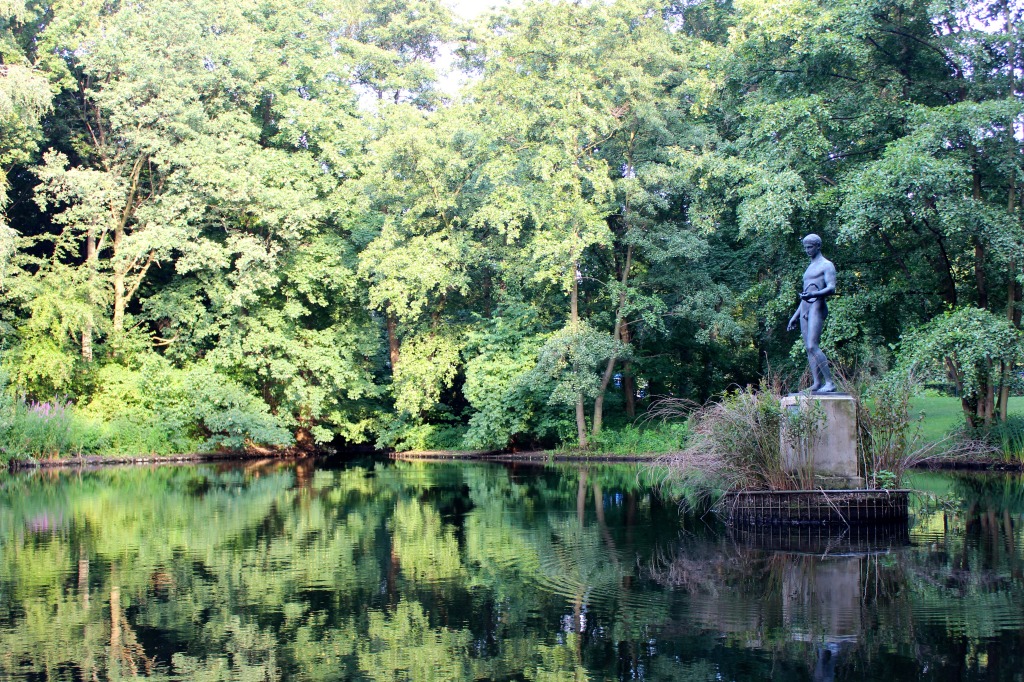 Our hotel was bit of a walk from the centre of everything, but then again everything in Berlin is spread out cause it’s really 2 cities in 1. So we walked pass the The Berlin Victory Column located in the Siegessäle every day. After walking by it so many times, we had to finally stop and go check it out, and trek to the top. For a couple of euros we hiked to the top, and what a hike that was! Very beautiful at the top, and you can see everything for miles. Worth the hike to the top, no line up, not very busy, and a few euros to get in.

We made the long walk down to the good stuff. We located Checkpoint Charlie, small little white building in the middle of the street with traffic moving on both sides, and tourist running to and from the little spot trying to catch a photo of it. Watch out for cars! For a couple of euros you can get a photo with the US Army officials in front of Checkpoint Charlie. To the side, and looking upwards you will also find the sign telling you that you are leaving the American sector. A little bit of a walk down the street and you will quickly find what’s left of the Berlin Wall. There is a lot of things to do and see down in this area, if that’s your kinda thing there, there is many tourist things to get trapped in, for us we enjoyed reading the english plaques full of information and wandering around. There a couple places in the city that still have the Berlin Wall up for viewing, this is the most popular area down by Checkpoint Charlie. We also found another penny crushing machine. 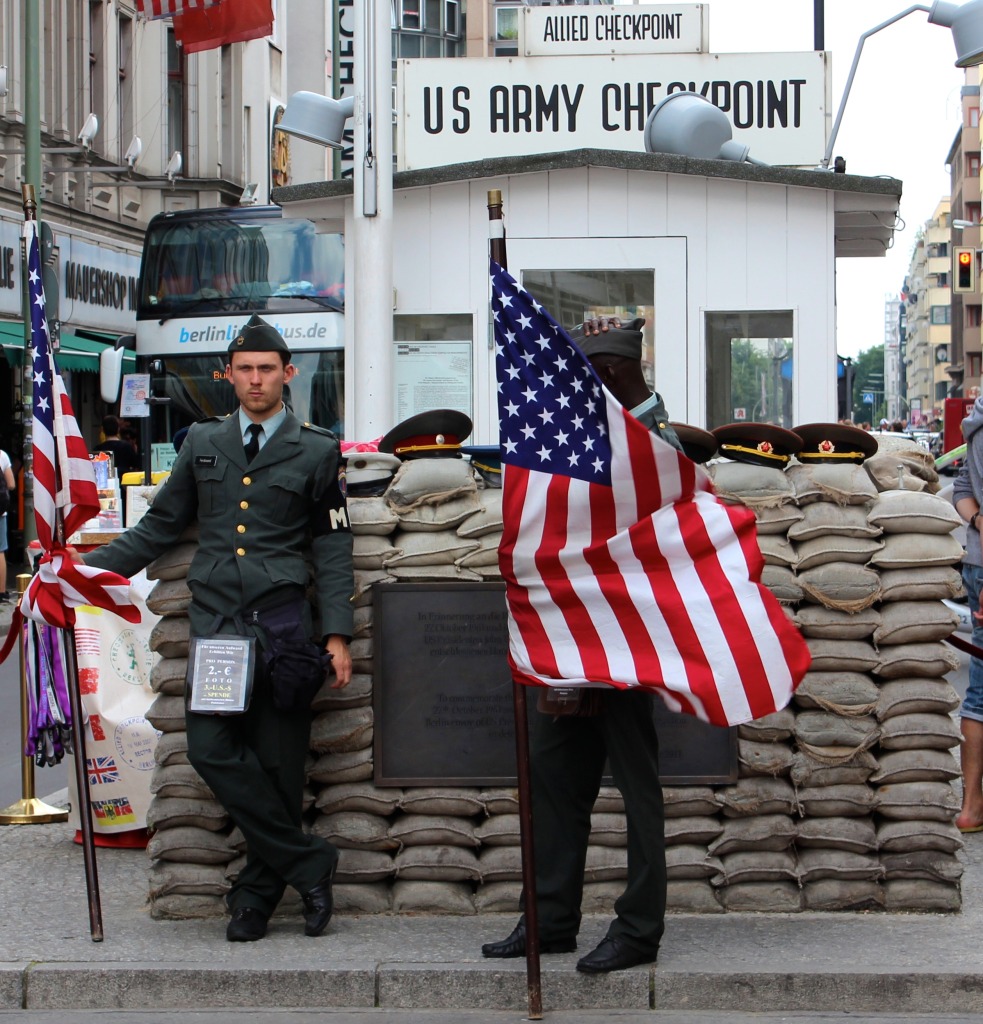 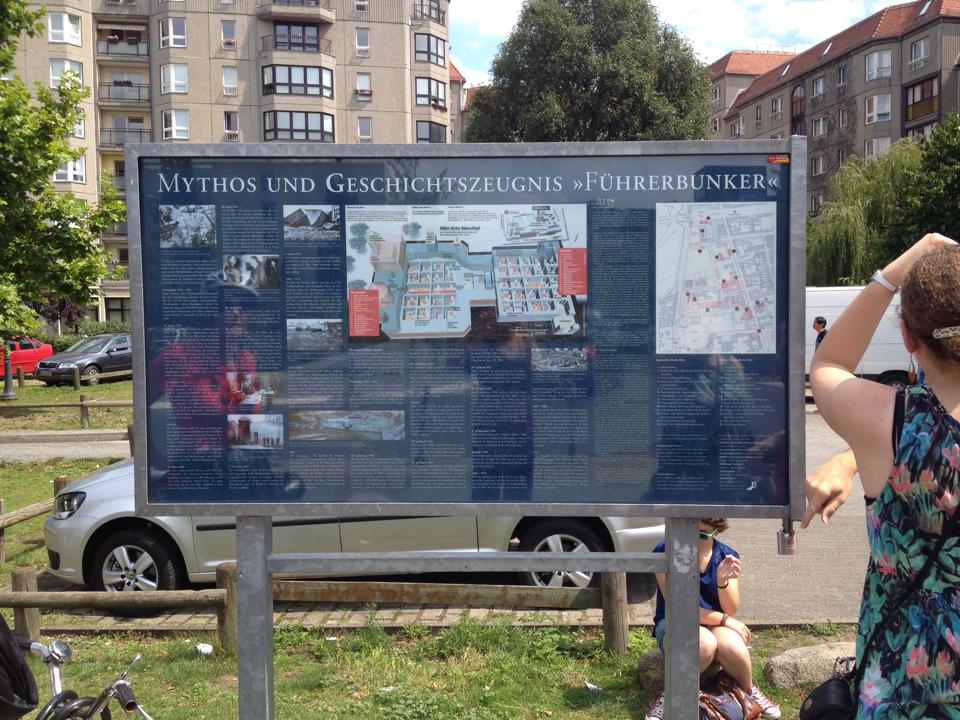 We tracked down Hitler’s Bunker, which turned out to just be a sign acknowledging the closest location to the entrance. The bunker is located almost 9 meters below the surface, with the bunker roof consisting of 3 meters of concrete, then the bunker it’s self. An impressive bunker that was built back in the 1930’s and 1940’s.

In the middle of it all between the Brandenburger Gate and The Berlin Wall is the Holocaust Memorial. An eerie and different type of thing to see. Understanding the history from WWII and what this symbolizes is very powerful. The museum is located below, and most of the time you will find a line up to enter. It’s some thing that peeked our interest, just saving the museum for our next visit. 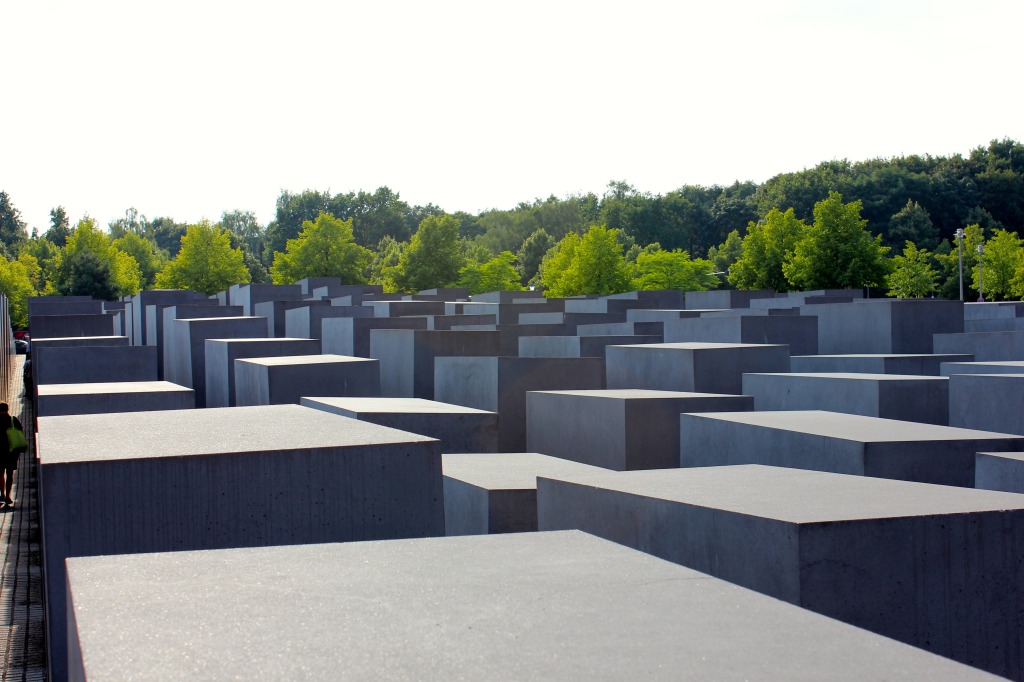 Since Germany was in the final game for the FIFIA World Cup of 2014, there was a lot of their colours plastered all over the city. But the biggest of it all was the “Fan Mile”. They had set up for the game, it consisted of a big screen set up at the Brandenburger Gate, then another big screen set up about 300 feet in front of that one, and 2 more of them all spaced out evenly. All while closing down a big popular road, and big fences around all of that, and the park. Lining the road inside the gates was many beer stands, and patriotic items to buy, and concession stands.

We did come back 4 hours the game started and it was packed full, and the lineup to get in was crazy. It was pretty much a moshpit! Security was checking bags for weapons, and no liquids were allowed in. The choice of sandals wasn’t the best choice, as there was smashed glass every where. The military was also there to make sure nothing gets out of hand.

The rain had started while we were on our way down to the Fan Mile, and continued to rain for a few hours, but even in the rain the Fan Mile was packed full. We didn’t stay for the end goal, that was still 5 hours away. We did find a small local pub with some locals. Enjoying the simple life, they moved the flat screen outside patio to watch the game. We met a lovely lady called Rose, who had amazing life story about growing up in the USA and Germany. Germany did score the winning goals, and it was one hell of party that night in Berlin! 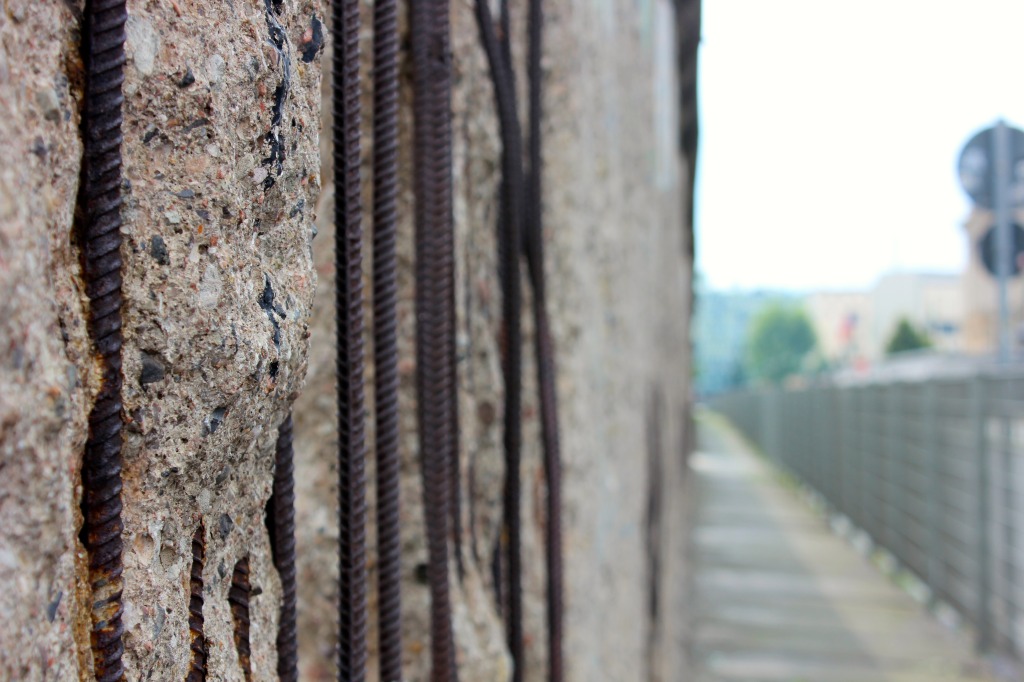 We travelled through the park so much, we were impressed at how any people were doing their own thing and minding their business, from jogging, yoga, picnics, enjoying a simple beer.  The drinking a beer part is what we were interested in, so we would pack a beer for a walk in the park. If you get the opportunity to visit Berlin, put it on the list. You won’t regret visiting this city.

Looking for more history in Europe, check out the Top Secrete War Cave or more WWI & WWII stories from Poland.