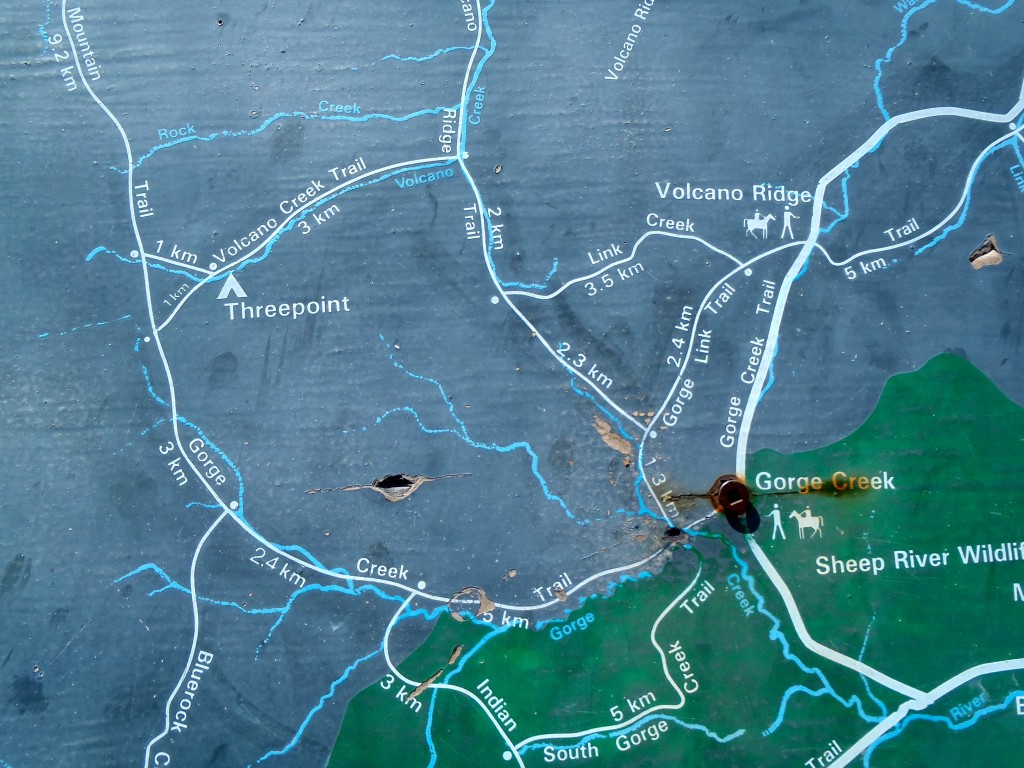 Well… after last years damaging flood, we couldn’t take it anymore! The Winter Road Closure had open up just before our “May Long Weekend”, and after beginning cooped up all winter with no access to the good trails we were set, bound, and determined to go out hiking this weekend!

We packed our bags, and headed for the mountains. Only this time, we had an extra 8km one way on the grave road to make it to the usual parking lot (bottom right corner of the map picture), this is the Gorge Creek Trail. While it’s still in late May, we are a bit early to start the long hikes into the further valleys or upper altitude, but HEY, It’s an adventure! So with our 60L packs filled with our supplies, we headed down the road. 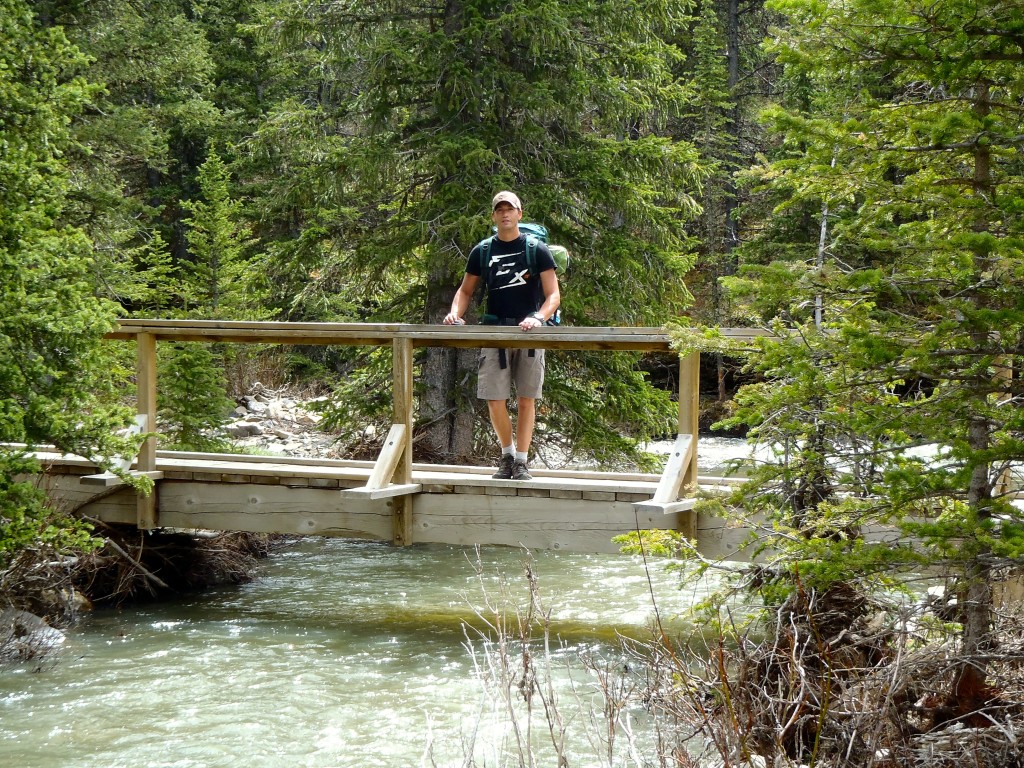 This hike is to prep us for the Europe trip, the difference is we won’t take our large 60 litter packs, or sleeping bag & tent, and instead smaller and simpler items. Although we do wish we could bring the tent.

While this area of Kananaskis offers many different paths and trails to take, we were interested in the longer path. We were packed for the night, since we did this hike 2 years ago and were planned to do it backwards this time. So, we had started up and towards the Gorge Link Trail to arrive at the Volcano Ridge which offers a magnificent view both towards the snowy rocky mountains or the rolling hills & prairies. Because it’s early spring here, the creeks and rivers are a little higher, and everything is just a bit wetter. So most creeks and streams require shoes removal, is highly recommended. 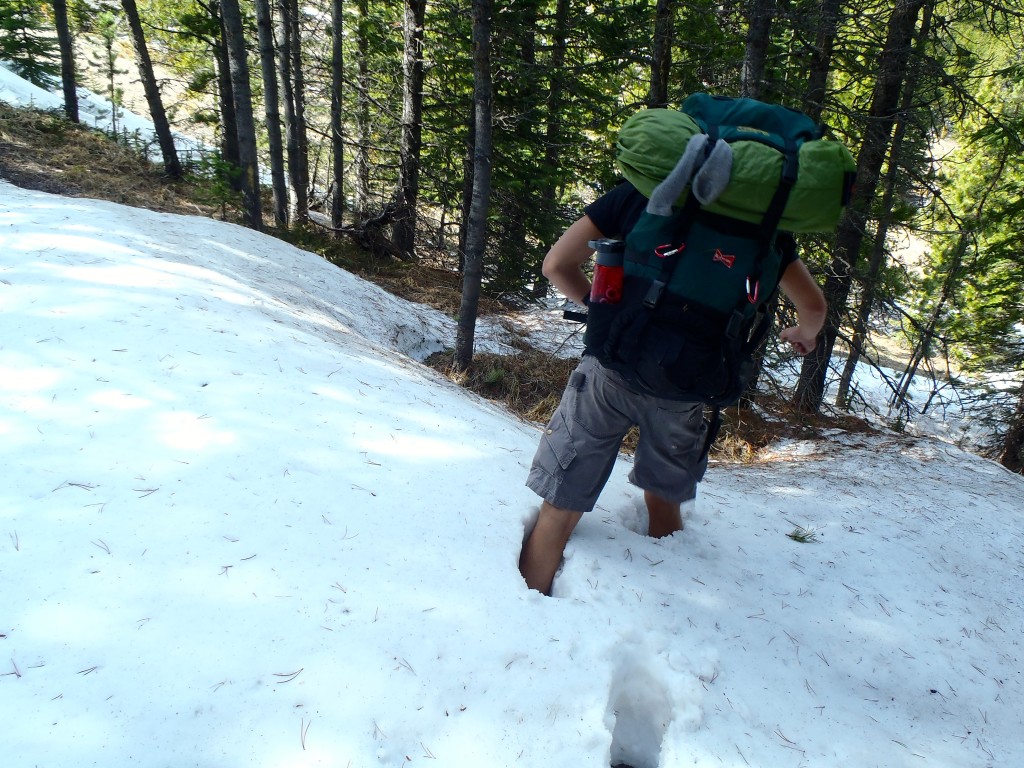 While making the elevation gain to the top of the ridge, we came upon snow! Surprise, surprise. But the more altitude we gained, the snow pack grew, not just snowdrifts or anything, more like 2-4 feet of snow. What a challenge with a 60L pack on your back, which weights about 40 pounds. Since we were so close to the top of Volcano Ridge, we continued on. When at the top, it feels like the connecting point between the Canadian Rocky Mountains and the rolling foothills of Alberta! 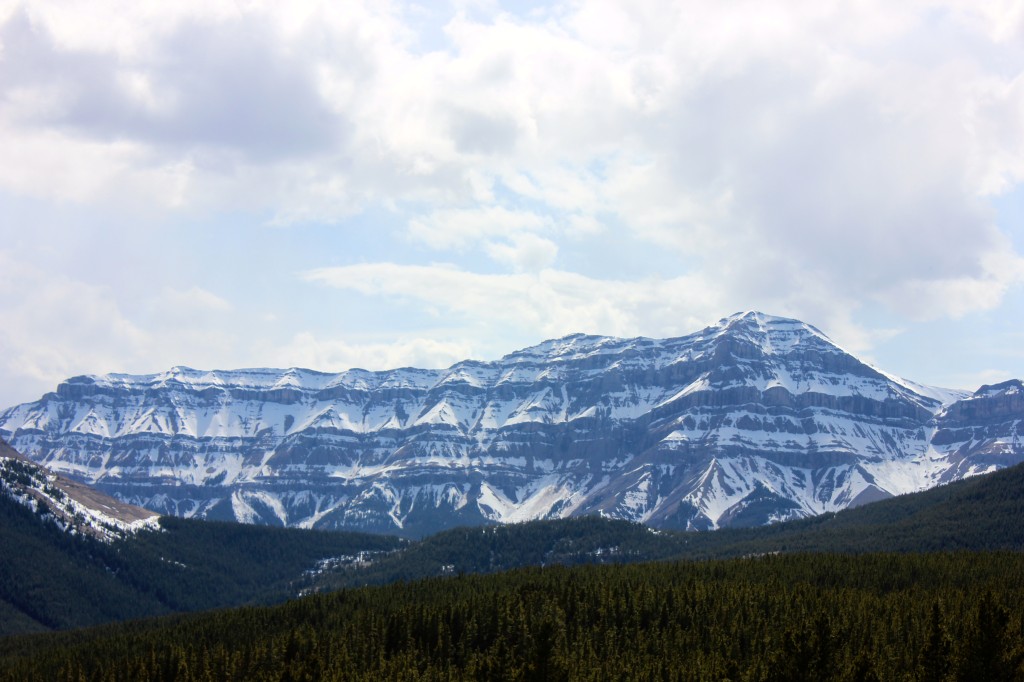 On top of Volcano Ridge the altitude is about 6,250 feet, and more often then not it’s always windy on top! After enjoying the view of the snow covered mountains, and the rain pouring down on Calgary, we took to the path leading us towards the snow covered mountains. While descending down the ridge, and always keeping an eye out for critters and animals, we caught sight of some very impressive prints in the path we were following. 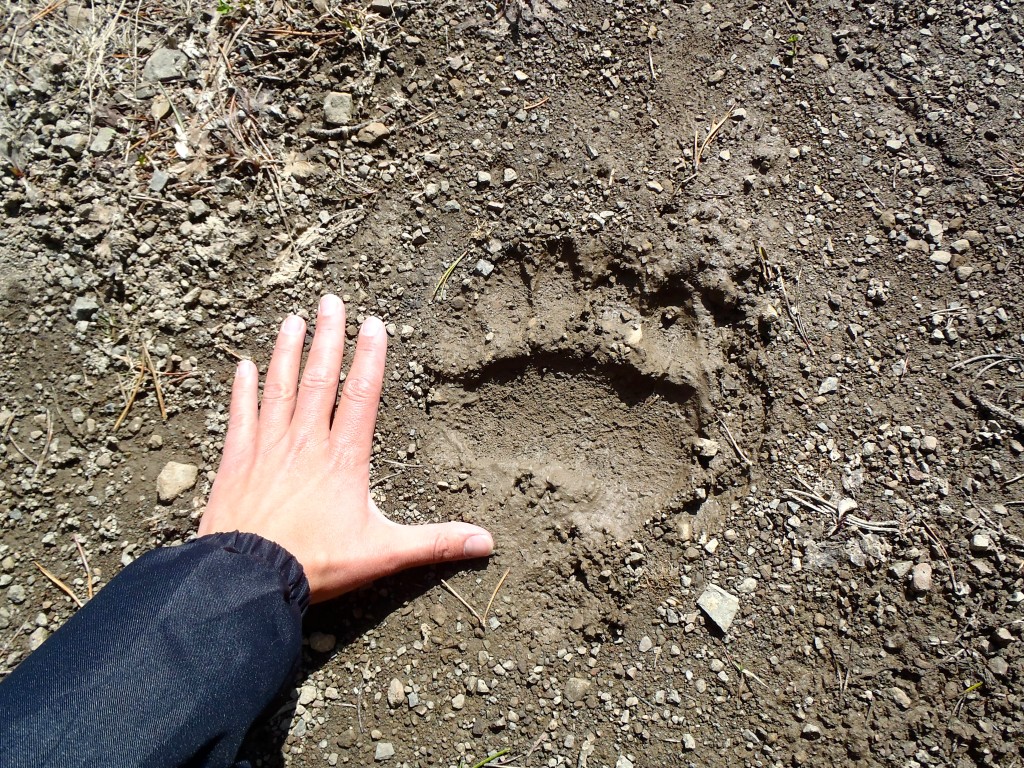 Since we live in a place were bears are commonly seen both on roads and paths, we weren’t surprised to see these tracks. Grizzly Bear! And what an impressive size they were. From past experiences we knew that there has been a grizzly bear in this area, but to know it’s still early season, and he’s hungry and on the move makes us a little more Bear Aware.

We continued following the path down over the rolling hills, with bear spray in hand. When we reached the trail heading, we realized the path we planned on taking had too much snow, and we hadn’t brought the snow shoes. We made the decision to take the short path, and head back down to lower ground. Out of the grizzly bear altitude and valley. This makes sleeping at night just that much easier. 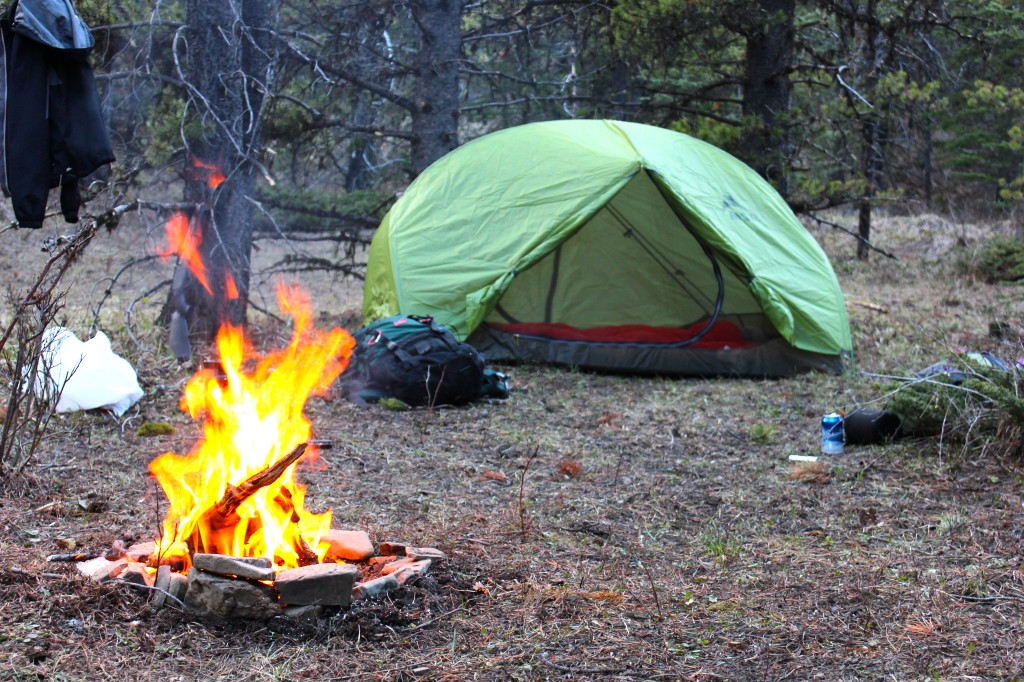 Once down in the lower area, close to the creek and meadow we found a place to call home for the night. With an abundance of dead fall wood available, and some snow too keep beer and food cool for a bit. We set up camp before the dark took over. The peace and quite of knowing that it’s really just the 2 of us in the middle of no wheres, is just a great feeling, while enjoying the good old camp fire. 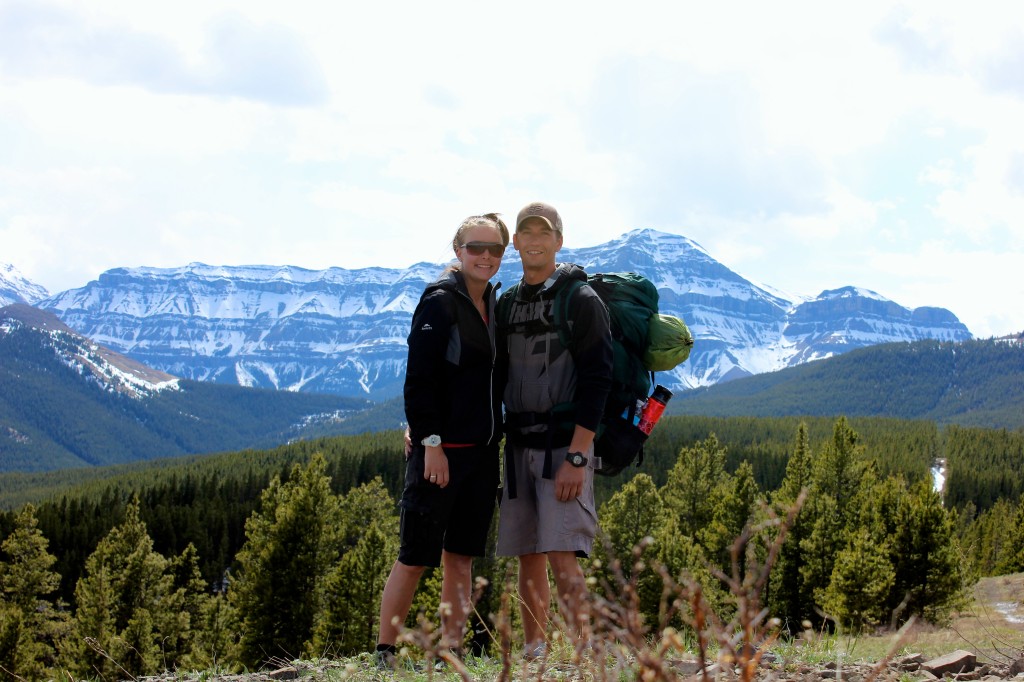 The highlight and breath taking part of this hike was while walking down the gravel road the following day, heading towards the truck. After all the tracks, or animals sightings, and nosies, we came upon a Black Bear digging for food. We came around a corner, while he was also on the inside of hill minding his business, just a digging on the side of the road. Once he heard us, the quickly scrambled up the hill and away, which was unfortunate as a picture would of been great, but it was actually the bear spray that Mel grabbed first, while Tyler grabbed the GoPro.