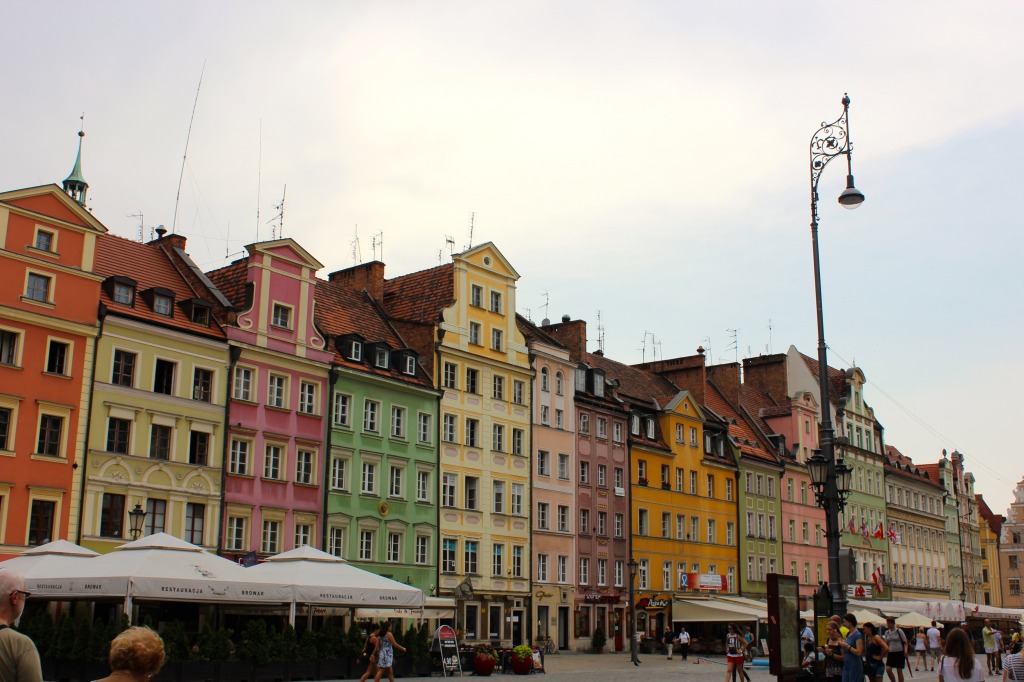 Are you traveling to Poland at all? A must see is and visit to Discover The Gnome Capital Wroclaw Poland!!

Poland was not on the euro currency when we where there in the summer of 2014, they use the zolty and it’s available to withdraw from the ATM at the train station or airport when you arrive. We took the train from Poznan to Wroclaw which was a direct train, we did check the train times 2 days before our travel date and purchased our tickets the day of travel, nothing fancy. Because of the language differences; how we would say Wroclaw isn’t pronounced the way it looks, but much differently. So our best way of communication was our notebook and pen, which worked great!

The train we were on had a screen which provided information, and also had english (a bonus for us!!). It had included things such as train speed, distance to go, next station we are arriving at, etc, etc, etc. AND it also tells us the outside temperature…… of +43° C. We had the luxury of Air Condition in our train, and didn’t realize the outside temperature was that hot, but we soon understood the temperature when we touch the window to confirm our curiosity of the extremely hot temperature. This temperature isn’t normal in Poland, and rarely seen in Wroclaw and Poland all together. So when we did get off the train, we instantly melt and sweated. 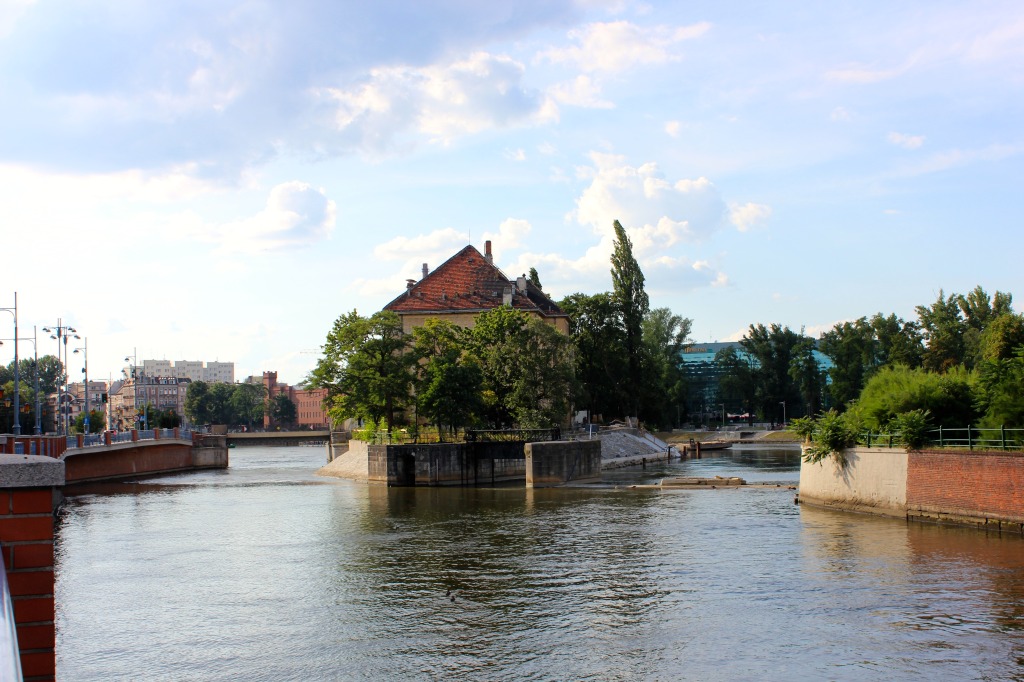 Once we located our hotel, and got freshened up we headed down to the square to get the layout of the city and find some things to do for the next couple of days. Our hotel was located just outside the train station, and on a direct road that would take us down to the square, so it was easy to locate everything we needed. The downtown old square has some neat streets and alleys, which are clean and safe to walk down and explore, or search for little gnomes. We were in Poland during the middle of July, so the weather was beautiful with the odd downpour that would only last for 30 minutes or so, this usually includes us ducking into the nearest pub to enjoy a cheap beer or an early meal. Poland has some very cheap shopping, and numerous places to shop at, but they also accept major credit cards which is a bonus, so bring some extra money and room in your bag.

Did You Know? Wroclaw is one of the last few cities to actually have someone walk around in the evening to light the lanterns, and then extinguish them in the morning, it’s only one small street. But still very cool! 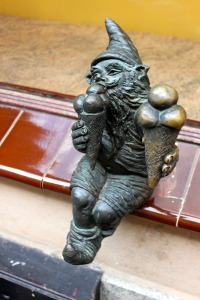 With our first walk around the city, we found a couple of gnomes just by stumbling across them. With a quick look in the “Wroclaw In Your Pocket” booklet, we soon realized there is over 250 gnomes located all over the city. It’s a great way to kill some time to locate them (high and low of course), for a couple of zolty you can also pick up the gnome map from the tourist office in the square. We haven’t really grown up and the kid in us was on a mission for gnomes, we did some research and marked as many down on our map to find them the next day. The gnomes aren’t that old in fact, they took off in only 2005! The gnomes symbolize the Orange Movement back in the 1980’s, which eventually lead to the fall of the communism in Poland in 1989.

Upon being on the road for about the 1 month mark, Tyler needed a haircut. And the biggest worry was communicating how short on the sides, and how short on top, and what type of hair style we are looking for. Well, we came across a Barber Shop (authentic one too!). The one gentleman did speak english, and we did explain what we were hoping to get. So while Tyler got his Polish haircut, Mel sat on the couch and waited…. Thinking to herself “How long could a mans hair cut 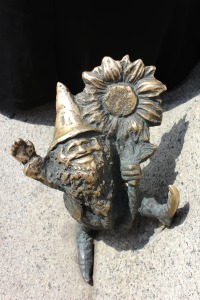 take? Don’t they just use the razor?”. The answer to those questions? Well Tyler’s haircut took an hour an a half, 3 hair washes later, and a very meticulous stylist! The cost for all this you wonder? With the currency exchange to the Canadian dollar – $7 dollars. Now Tyler understands why the ladies enjoy the pampering at the salon so much.

While gnome searching and exploring the city, we stopped for a quick cheap Polish beer on the side of the cannel. While enjoying the beer and the boats go by, we couldn’t help but hear some good english speaking people but not just english – Canadian English slang. So we had to asked….. “Where you from?” Of course the reply is Canada, but because we are familiar with that county. So our next words is “Calgary, Alberta”. Well before we knew it, we were chewing the fat with some local Albertans, they were from Edmonton, but we won’t judge. We were absolutely happy to run into some Western Canadians. We had discovered they were in Europe for the 8th World Choir Games in Latvian. There is a Youtube video about an hour long, and it’s amazing to hear it. Anyways, they were traveling around Europe checking out some cities, and sining in a few cathedrals along the way.

The food was great in Poland, and we would highly recommend trying a few dishes! We found a grilling restaurant called Whisky In The Jar, and we must say it was top notch food and service! If you are ever in Wroclaw check it out, you won’t regret it.

A Travel Tip when choosing a seat outside at a restaurant be prepared to be bugged by baggers, sit one table away from the edge to enjoy your peace and quiet. 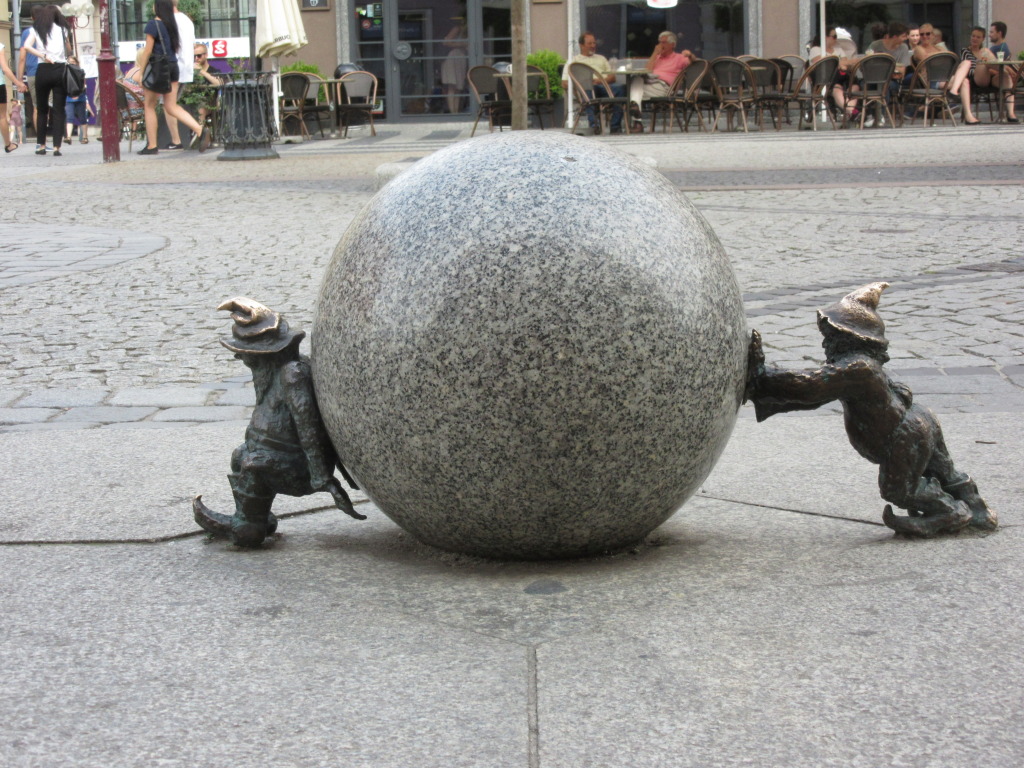 Thanks for checking out our blog about who to Discover The Gnome Capital Wroclaw Poland blog and the highlights. We visited Poznan as well, check out our blog here!