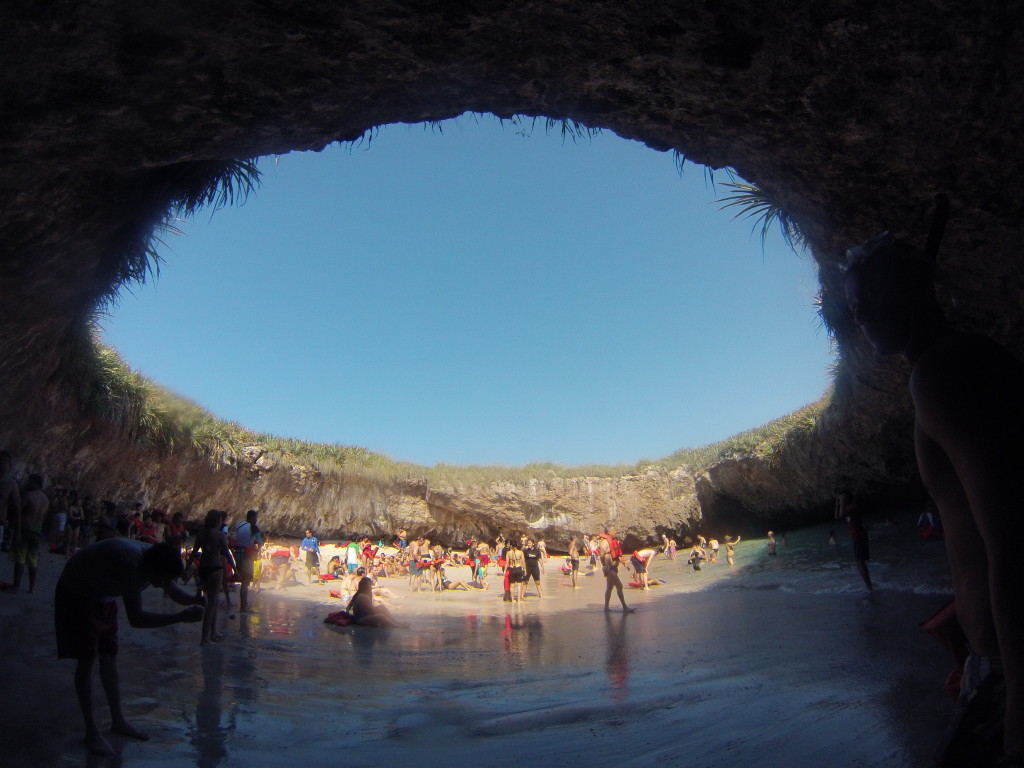 Inside the Cave At Marietas Islands

The day started with the 6 of us and a new friend we met, walking down the beach in the early morning to a restaurant where we indulged at the “All You Can Eat Shrimp” from the night before. Where after we successfully filled are stomachs with shrimp and beer before we signed up for a snorkeling tour with the local restaurant owner, Salvadors! He had not done very many tours before but was trying to earn a little extra cash doing what he loves.

As we walked up to the bar to meet the rest of our group, we had discovered there were 6 more Canadians waiting to go! As we casually met each other, we quickly found out they were from Alberta, the common answer in this area. Next step, catch the taxi to drive down to Sayulita, a small town 35 odd KM south of La Peñita where we were staying. About an hour later we pulled in to the community of Sayulita.

Well, it’s been know for it’s “Off The Beaten Track”, and it’s true! The big tour groups organized out of Puerto Vallarta begin here, only because it’s the closest location to do some of the water activities. But if you were to look over your shoulder, you will find the true Mexico! Most locals only know a few words of the English language, but they are more then happy to see someone new, and help you out. If you do look off the main drag, you will find mostly Canadians and Americans relaxing; either enjoying their retirement or just traveling as an expat. 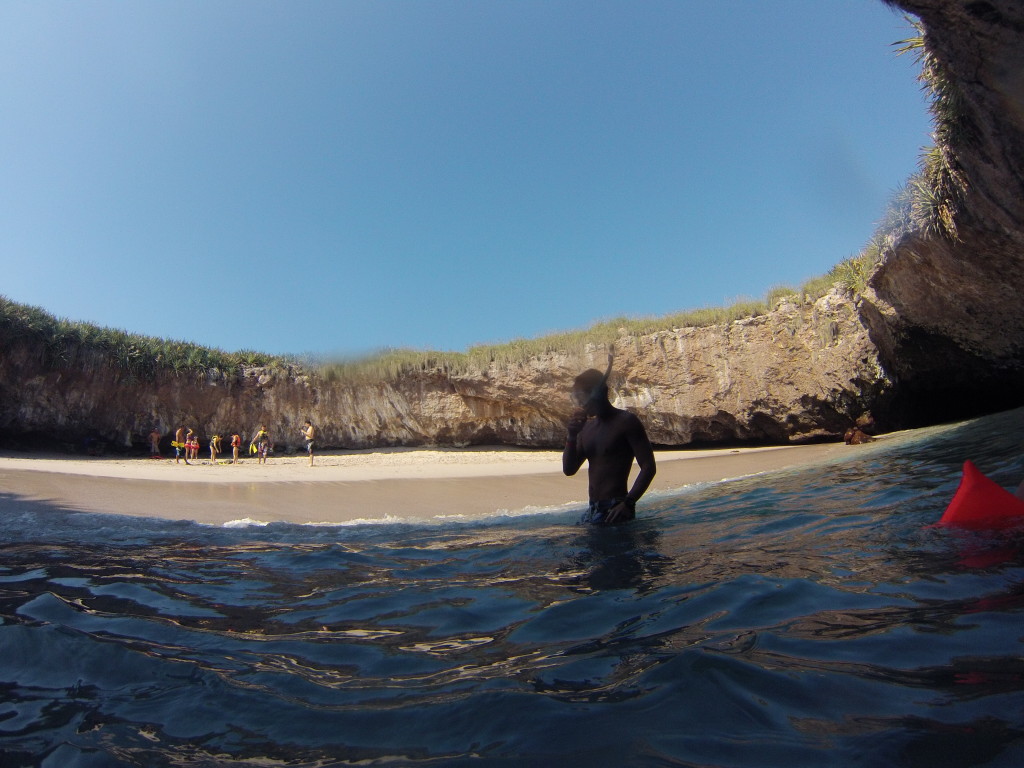 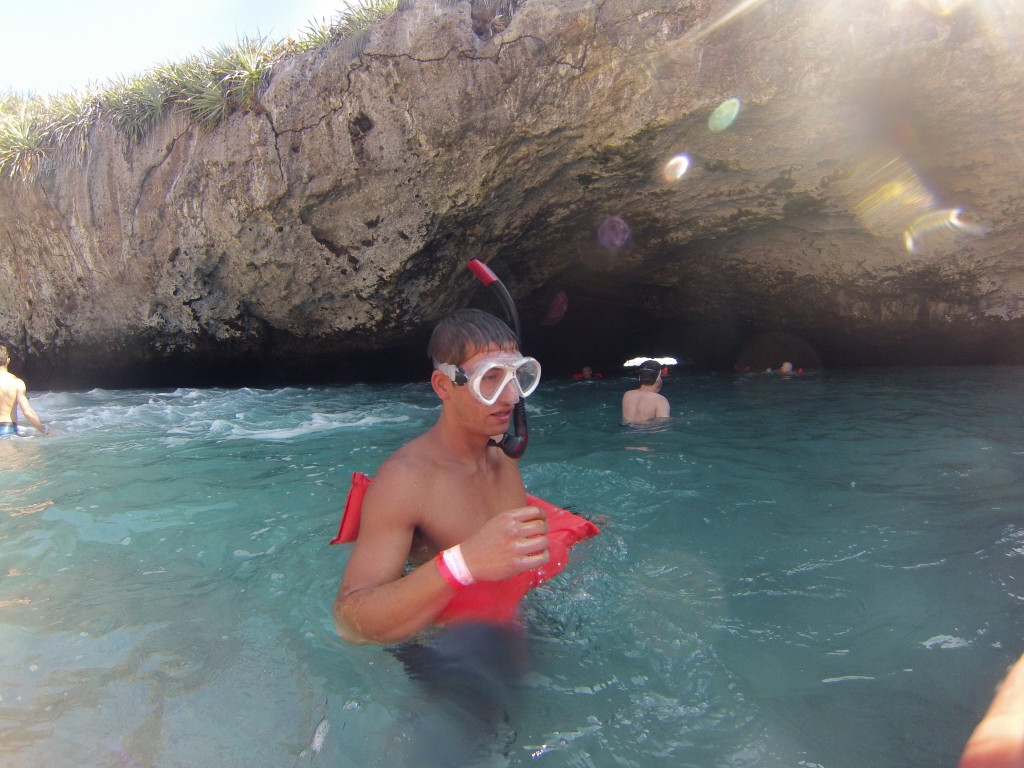 The breeze from the north pacific ocean blew over the front of are 25ft Mexican fishing boat, as the humpback whales jumped from the blue choppy ocean. Dolphins swimming just off the bow in view of the little Marietas Islands, a national park to protect todays natural environment.

FUN FACT: Formed by volcano’s, and then used to by the Mexican government to test bomb until the 60’s.

This was truly a breath taking moment, after an hour of heading straight out in to the blue we arrived for our snorkeling adventure. Even thou we are experienced scuba divers, and you can dive here, we were both excited to jump in the water and swim through the 100ft cave. At this point the guide, Salvador, briefs us with the safety talk, “Don’t swim into the big surf by the sharp pointy rocks”. Which I think everyone on the boat had already thought about it, as we look at the big surf crash into the huge rock walls.

Almost everyone jumped in and began the long swim into the cave, a few didn’t feel they where strong enough swimmers to make the distance with the big surf, so lifejackets were an option. However, if you are a confident swimmer and have experience, it’s your option to pass on the life jackets. We did swim into the cave with our life jackets, only to realise they were too much while trying to snorkel. Lucky enough for us, there were others who were interested in taking another life jacket. 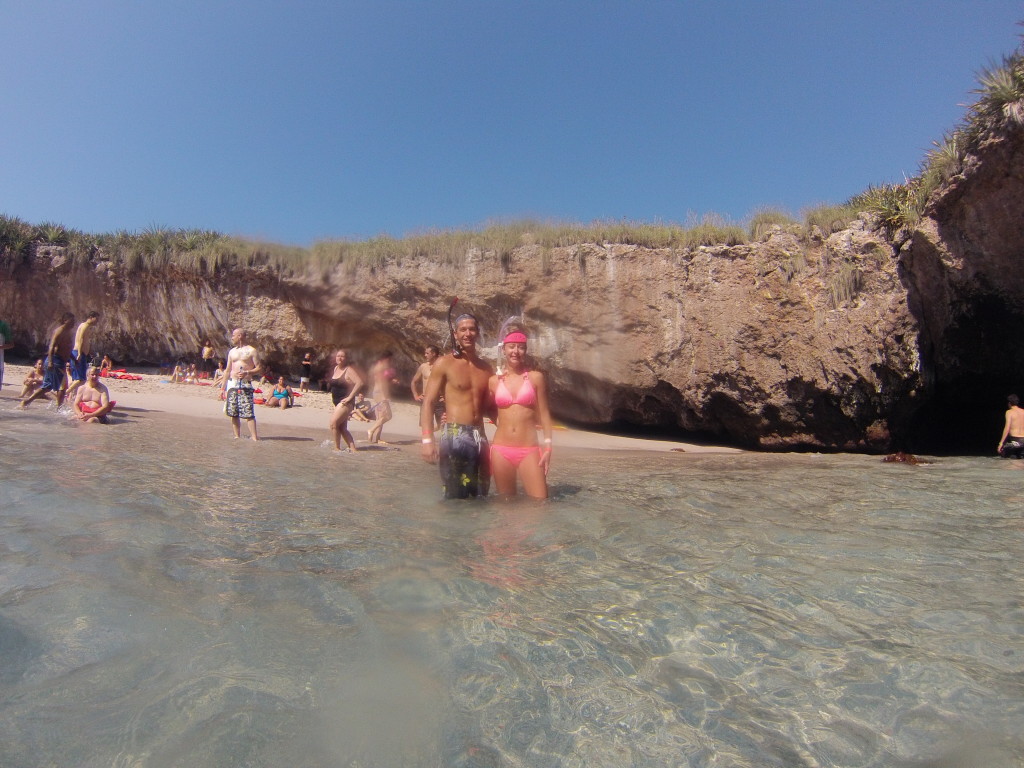 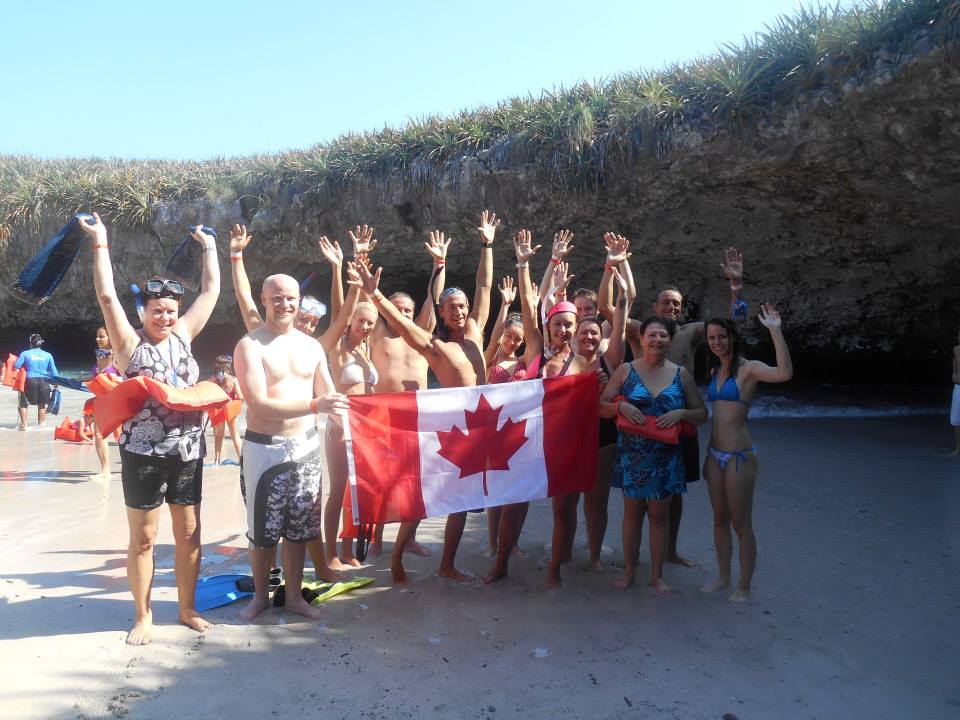 After a long swim we entered the cave to see a beautiful circle with no way out besides the way we just came! We had officially discovered the “Hidden Beach“. The swim through the cave, was interesting enough, as the surf both pushes and pulls you in or out. After an hour of pictures and exploring the other small caves we headed back into the big cave towards the boats. Melissa and I did some skin diving on the reef before we got back on the boat where are guide had some ice cold beers waiting, and a smooth bottle of tequila!